Welcome to The IELTS Community

Join us now to get access to all our features. Once registered and logged in, you will be able to create topics, post replies to existing threads, give reputation to your fellow members, get your own private messenger, and so, so much more. It's also quick and totally free, so what are you waiting for?

Log in Register
Blue
Red
Green
Orange
Voilet
Slate
Dark
You are using an out of date browser. It may not display this or other websites correctly.
You should upgrade or use an alternative browser. 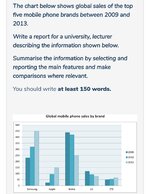 The bar chart provides information for the top five mobile phone brands on a global scale in the years 2009, 2011 and 2013. The given figures are from zero to five hundred the highest.

Overall, during the given three years the most usable brands were Samsung and Nokia, while the Apple type was the only one that undesirable in 2009s.

Meanwhile, at the beginning year, 2009, the Nokia label has shown a high trend at around 450, however, it then dropped and remained steady at 250 in 2013. Furthermore, the other two brands (LG and ZTE) were almost the unwanted products during the provided three years, which both were at only over 50, respectively.

It's about sales, so, most sold or most popular will be more appropriate terms.

brand and label are not synonyms of each other.

The IELTS Community is a community of IELTS aspirants, IELTS experts and those who want to improve their skills in English.